I followed the recipe exactly only added a teaspoon of cinnamon and a cup chocolate chips. They won't eat anything in my house without chocolate in it. My cookies were not crumbly and dry at all they were chewy and moist. I did use a reduced fat peanut butter I don't know if that had anything to do with it and the shortening I used was butter flavored. This recipe was a great way to "hide" the whole-wheat flour, usually you have to use a blend of white and whole-wheat flour. The peanut butter was prominent which masked the taste of the whole-wheat and the oatmeal masked it's grainy texture. I thought these cookies were plenty sweet enough. The only thing I would like to reduce is the amount of shortening by replacing it with apple sauce to make it a slightly more healthier alternative. 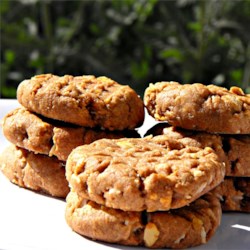