I made these today and was a bit worried they wouldn't come out well, judging by some other reviews, but to my delight they turned out absolutely delicious! I read the comments and changed the ingredients accordingly, using 1 tsp vanilla extract instead of 1/2, 1 cup flour instead of 3/4, 1/2 cup margarine instead of shortening, and 1/2 cup chocolate chips instead of nuts, as well as baking for 8 minutes. There didn't appear to be much batter in the bowl so I wondered how many it would actually make, and it was very, very moist (probably because I melted my butter). I rolled them into balls with my hands as I like to do, though I made them small and widely spaced apart in case they flattened. They actually didn't flatten at all! And because I used small bits of batter to begin with I found out they puff up quite a lot, so you could get more cookies if you used less batter. All up it made about 20 cookies, so still not a whole lot but a decent amount. The coffee grounds give a sort of crunch to them, as if I had put nuts in them, and it's enjoyable. Next time I make them I'm considering dissolving the grounds in water first to see how that turns out. 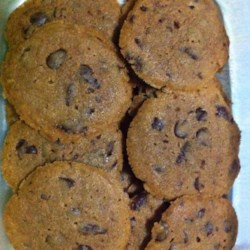