Great pie. This was very fun to make - as the crackers were boiling, I was delighted by how much they smelled like apples. Other than adding about 1/2 teaspoon of cinnamon to the syrup (I love cinnamon) and using less of the topping than called for (I'm a cheapskate; didn't want to use all that butter) I followed the recipe exactly. By the way, as another reviewer noted, DON'T stir the crackers after putting them in the syrup. Just plop them in and leave them be for 5 minutes. 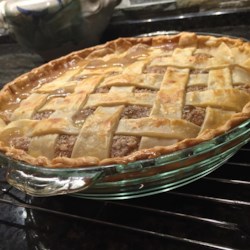