Thank you for posting this recipe! We made it for Christmas dinner this year with a few changes. We only used 2 shanks so we used the calculator to adjust the recipe and cut the vinegar down to 1/4 cup based on everyone's reviews here. We put everything in the dutch oven and put that in the oven at 350 for two hours, flipping the shanks after hour 1 just to make sure they didn't burn since we didn't have a lot of onion protecting the shanks from the bottom of the dutch oven. Served the shanks with Greek lemon garlic roasted potatoes that we found a recipe for at About.com's Greek food section, putting the potatoes in the bottom oven tray at the end of hour one and then taking both the shanks and the potatoes out at the end of hour two, ready to serve. The sauce for the lamb shanks was amazing. We used a good wine and were not disappointed at all. I saved the leftover sauce for pasta (conchiglie) the next day and it was phenomenal. Will definitely make this recipe again. My dad, who was visiting, insisted on having a copy to take home so he could do it again too. We both felt that if this had been served to us at a restaurant we would have been happy to have paid top dollar for it. Even better to be able to say that we made it ourselves! Thank you. 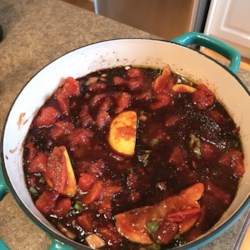