I was craving chocolate dessert one nite and came across this recipe. It wasn't bad, I just don't like the instant pudding taste.. BUT I modified it the second time and it came out BETTER! I added about 3/4 cup semi-sweet chocolate chip in the recipe. I first melted the chocolate chip with half of the milk in the recipe (for extra milky favor, use evaporated milk instead) in a pan in very low heat (and keep stirring). Add that milk chocolate mixture to the pudding mix. Then pour the rest of the cold milk and mix together until smooth. Put that pudding in the fridge for half and hour (make sure it is cold). Then fold in the whipped topping afterward and watch that pudding become fluffy, just dont over mix or you will get a blah of chocolate 1/2 mousse 1/2 pudding cross-breed. 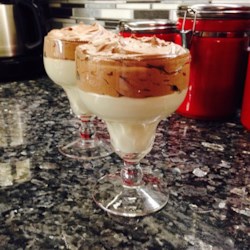