This is a great recipe for Baklava! You have to make it. I had phyllo dough that had been in the freezer for a while and was starting to dry out, so I decided to make this recipe. Even though it was quite difficult to work with dried out dough, the end result was fabulous. Flaky & crispy on top with yummy sweet layers in the middle. I added a bit of sugar to the nut mixture (1/4 cup max) and the sugar caramelized nicely in the oven. I also added a touch of nutmeg and ground cardamom to the nut mixture (not too much, because it's really strong and you don't want it to overpower the cinnamon flavor). I also added a bit of orange zest to the syrup along with the vanilla, and it was delicious. It wasn't as sweet as store bought baklava and that made it so much better. Before putting it in the oven, I cut the baklava with a pizza cutter and that really worked well. I served it in multicolored cupcake wrappers. Yummy, yummy. One thing I noticed was that it was a bit dry for my taste. Next time, I think I'll increase the sugar/honey syrup by 1/3 to 1/2 than the recipe calls for. I had originally made this recipe to share with my extended family, but now I'm thinking of making something else to take to that party and keeping the baklava at home for us. Soooooo good! Try it, you won't regret it! 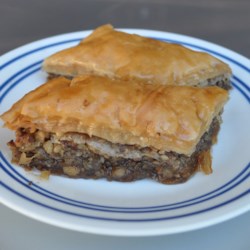