I've made it twice-loved it both times! I used to watch my grandmother make fudge when I was little. I've ruined a few batches on my own. There is nothing wrong with this recipe. You just have to be careful. Fudge can be frustrating to make. Thanks for all of your helpful tips. 1st batch came out just as I remember it. Firm, but not rock hard, and not sugary either. I was concerned, because it was snowing at the time I made it. 2nd batch: Snowing again. And this time I wanted it to be JUST a hair softer than before, so I took it off of the heat sooner. Too soon. It took forever to set. Both times I took it off of the heat and immediately added the butter, mixed it in, and then added the vanilla. The first time it didn't take too long to beat the sheen off of it. The second time it wasn't done, but I'm SO glad I didn't give up and throw it out! I got out my hand mixer and just mixed and mixed it...I'm guessing I mixed it for at least 20 minutes until it lost it's sheen! I kept going because I could tell that as it cooled it was thickening. The second time was much softer, and not as good as the first at all. But still worth the effort. I make mine on an electric flat top stove with a thermometer and the cold water test-no stirring after it comes to a boil. I just wanted to list both of my experiences in case somebody was tempted to throw out your fudge if it didn't seem to be setting. 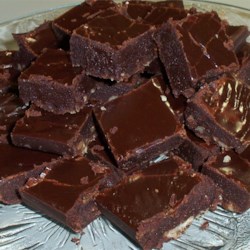