THE BEST! i had a 5 lb roast, and we don't like it too red (well, I do, but the kids get kind of grossed out). To get it a little closer to medium I roasted it at 475 for 39 minutes. after 90 minutes in the turned-off oven, the meat thermometer read 125, but I figured it had definitely been up to at least 145, as it should be. I took it out and covered it with tin foil. While the roast rested, I put fries in the oven and made up a package of Aus Jus mix, adding the small amount of juice and scrapings from the bottom of the roasting pan. The roast was sooo warm and juicy when I cut into it! I got out my handy, dandy Electric Food Slicer, and sliced up the roast very thin. Then, I warmed the beef in the aus jus for a few minutes. Finally, while the meat soaked, I make up some 'Weck rolls. Slice fresh deli kaisers, place them face down on a cookie sheet, and brush with a small amount of water. While still damp, grind coarse salt on the tops of the rolls. Pop them in the oven for a few miutes to toast. Serve sliced beef on the rolls with aus jus on the side. Horseradish is a great compliment! 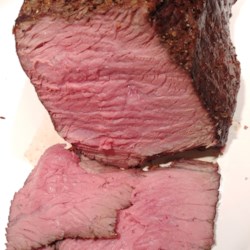