THERE IS A BIG MISUNDERSTANDING ABOUT THIS RECIPE!! There are 2 styles of rice pudding... One style that is generally preferred by African Americans and quite a few southerners. It is a baked pudding MEANT to be dry and thick enough to cut into squares if you wanted to. It is a thick baked custard base, most often served warm. Then there is a pudding the rest of the population prefers that is a type of creamy vanilla pudding base with rice in it, usually served cold. If the latter is what you seek,... THIS AIN'T IT!!! Go to a different recipe. This recipe mirrors what I grew up understanding to be rice pudding, but may not fit the bill for you if you grew up on the other kind. Probably if you grew up eating one of them, you'll HATE the other. 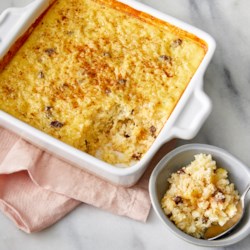