This was a great creation, but it did need modifications for my taste. First, I used a pot since I feel that stews need to sit and cook slowly for optimal flavor and tenderness. Second, since I am not a beer drinker, I used about 1 and a half bottles, and not the entire 2. To go with the theme of the season, I used Samuel Adams October-fest Ale. Second, there was something missing from flavor, so to jazz it up a bit I added a few beef bullion packets and a 1/2 of cup of Worcestershire sauce - that perfected it for me for flavor. Finally, I agree with most of the other posters that it was not thick enough and too soupy so I did thicken it with some cornstarch - that was it! I will make this again, but with the additional modifications I did. :) 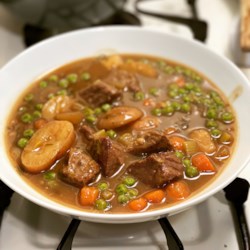