Just a note...this is a super recipe, but you will want to stick with the powdered sugar, only because it helps to make it thick and rich, and unless you use superfine sugar, white sugar will most likely end up at the bottom of the container because it's heavier than all the other ingredients. I added a bit more cocoa powder, and also added a jar of amaretto creamer to a batch, it was amazing!! For a batch for the kids I added about a cup and a half more powdered sugar, and on another batch I added cinnamon sticks inside the containers I sent. I have never had so many raves...this is a keeper, and one to definetly experiment with!! :) *Extra added Note* I just made a new batch omitting one cup of the milk for 2 small containers of cinnamon creamer, and using 1 cup of nestles quick along with the cocoa (ok, so christmas is depleting my pantry a bit!) :) But it was so incredibly good that I decided to keep the whole batch for our family and go to the store to make a new one!! One Last note, added in 2009, while making the cocoa last year, I found that making it all in a big kitchen trash bag made this SO much easier to mix...really, try it, you'll love it!! 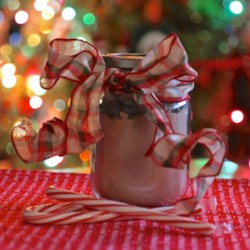