I have to say that when I saw this recipe I thought "Eh, nothing more than glorified rice krispy treats..." but boy was I wrong. The mixture of tastes in this recipe is outstanding and the texture is, in my opinion, much superior to RKTs. I did go ahead and add the miniature chocolate chips while the mixture was still warm so they melted about halfway as I stirred and this made a nice look/flavor in the finished product. I didn't make any other adjustments other than that my box of cereal was 16 oz instead of 12 oz and I adjusted the other measurements in proportion. When we tasted them we were very surprised at how good they were... I mean, I didn't expect they would be bad or I wouldn't have made them. I chose the recipe, however just because I was making rich brownies for something, needed another dessert, and chose this because it would be slightly different. I was making an extra pan of one and let my husband choose by reading the recipes to him. He chose the brownies; but after tasting both he said he wished he had chosen these. He kept sneaking in to steal more of them before I could take them to our event. I will absolutely make these again. Probably tomorrow!! 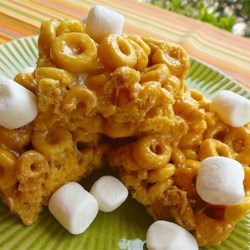