Awesome! I love root veggies and this was a nice change from plain old mashed potatoes. I boiled everything in water instead of chicken broth because I'm trying to cut back on sodium. I don't think it affected the flavor much because this was so good! I made sure to carmelize the onions for a long time and tossed in the chopped garlic during the last 4 mins of cooking the onions rather than boiling the garlic with the other ingredients. I also folded the onions and garlic into the potato mixture rather than spreading them on top. I also felt like the mixture was a little dry when I mashed it in my Kitchen-aide mixer so I tossed in a little rice milk and that did the trick. Ate this with "incredibly cheesy turkey meatloaf" from this site and asparagus with lemon. Delicious!! This one will go in the recipe box for sure! 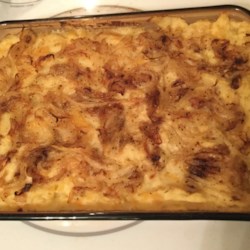