I'm going to give it 5 stars even though it didn't quite turn out for me. I tried to double this recipe and my advice is...DON'T! It never reached the fabled gooey, almost carmelized state of which so many people spoke. I stood over the pot stirring for not 1/2 hour, but 2 hours hoping against hope it would all work out in the end. While it smelled great and the onion became soft, it never carmelized. Plus, my hair smelled like onion for two days from standing over onion steam for so long... While it was very very good I must only imagine how much better it would have been had it attained the gooey state. So, I'm going to try this again-without doubling it. I used the recommended cheese...don't substitute on the Asiago. MMMM GOOD! 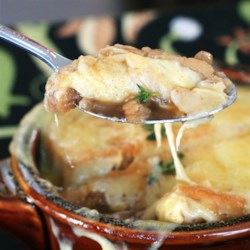