I've made this twice--once as written, and once with some alterations. It's pretty good as a base as written; we had it with grilled shrimp skewers and it made a nice, relatively light dinner. The second time, I added red bell pepper and onions, along with more garlic. We had it with shrimp again, mainly because it's what we had on hand. It was a bit heartier with the extra veggies, and since I gave the onions a good, long browning time, that helped boost the flavor. It's still not a high-flavor dish, but it's tasty and a good way to get the veggies in. You could probably adapt this to whatever vegetables you have on hand and it would still be good. 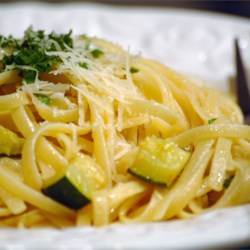