I tried this one twice. The first version I followed almost exactly the recipe, though substituting some of the nuts for other nuts but keeping the qty the same, and adding some kosher salt and maple syrup as suggested.. The result was VERY oily and not a lot of flavor. So.. second time around I made the following changes: increase oats to 6 cups reduce oil to 1/2 cup used 1 c honey, about 1/3 c maple syrup, and about 4 TBS brown sugar, and a splash of apple cider...I also added cinnamon and salt to the honey/oil mix. YUMMY! I also used some hazelnuts, pepitas, dried cherries, flax seeds, and threw in some whole almonds too. The result of this batch is much better. The apple cider makes it smell great too. Way less greasy, and still was able to make clumps (press down into the pan after adding fruit.. once cool break into clumps). I am making this for xmas gifts.. so I added a few white chocolate chips to each bag after it was cooled also. Great recipe, it is very forgiving so go ahead and experiment! 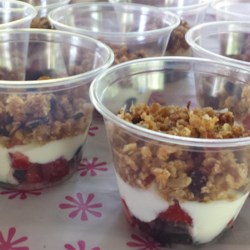