I made this recipe vegan (and thus changed it A LOT). The muffins were perfect!!! To make vegan: 1/2 cup SOYMILK + 1 teaspoon apple cider vinegar instead of milk, 1/4 cup SOY YOGURT instead of 1 egg, 1.5 cups CAKE FLOUR instead of 1.75 cups regular flour. Also, I added 3/4 teaspoon cinnamon and 1/8 teaspoon allspice, and greased the pan with cooking spray instead of paper liners. Bake for 20 minutes. 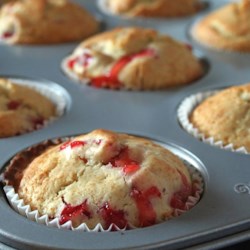