I made this to have with homemade French fries tomorrow but I was having leftover pizza for dinner tonight and decided to taste test the mixture with the pizza crust. After sitting about an hour, this stuff is already delish! I had a small golf ball sized red bell pepper and I used the whole thing. I also used an entire jalapeño sans the seeds and membrane. I had an old opened package of Hidden Valley Green Onion Dip mix so I used the rest of it. I don't know how much was in there. I added no hot sauce. I don't know how much cilantro I added either. I put the red pepper, jalapeño, cilantro, dip mix and a part of the buttermilk in a small food processor and whirled them all together. Then added the rest of the ingredients. This will be my go to ranch dressing from now on! Thanks! 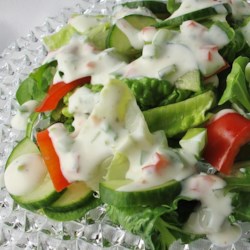