These were really delicious -- and easy. I halved the recipe because 18 muffins would have been way too many. Still made 10 large muffins, which was great. I could have squeezed out another two, I think because I filled the tins more than the 2/3 full that it called for. Batter was thicker than I thought it would be when dropping in the hot dogs, but they turned out great. I used 3 slices per muffin instead of half a dog, which I'm not sure would have fit in my muffin tins. The slices were popping out of the top a bit, but it didn't really matter. I served with honey mustard, which made them really delicious. They are pretty hardy, too. I was serving them as a Superbowl appetizer, but they were super filling could definitely be a meal. I can see how kids would love these. I have a couple left today, so I'll see how the keep. I had served them straight from the oven yesterday, so they were perfect. Will definitely make these again. 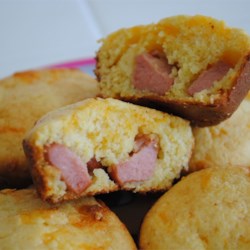