I used my own homemade cornbread and my own version of the Red Enchilada sauce, which is also from this site. I did add a couple spices (cumin, paprika, onion powder, garlic powder, oregano, coriander, pepper, chili powder) and I used all enchilada sauce. I did not add extra salt as there was enough to taste in the enchilada sauce. I used the amount called for in the recipe, cooked the meatballs until they were browned, then poured off the grease and then poured the enchilada sauce-cheese mixture over the top. I baked it for another ten minutes so I could soak up some of that sauce. We all liked this way more than I thought we would have, even my husband who balked at eating this for dinner. Super easy, even using my own homemade ingredients instead of shortcut foods. I'll make this again for sure. Really genius idea, Shelly! 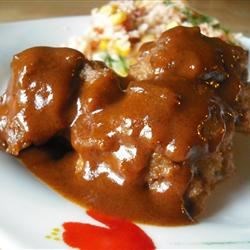