My husband said he didn't really care that much for angel food cake... until he tasted this one! But I did make a couple of changes: I cut down the powdered sugar to 3/4 cup, and substituted Ghiradelli sweetened cocoa powder + 2 TB dark cocoa. Also reduced vanilla to 1 tsp and added a tsp of Kahlua, adding them before the flour. Mixing speed is important. Instead of using high speed to beat the egg whites, start on low speed until the whites are broken down and frothy; add salt and cream of tartar and beat at medium speed until the egg whites form billowy mounds. Add sugar, 2 TB at a time, keeping speed set to medium, until all sugar is incorporated and soft peaks form. DO NOT beat until egg whites are stiff; that makes it hard to fold the flour in without deflating the mixture. 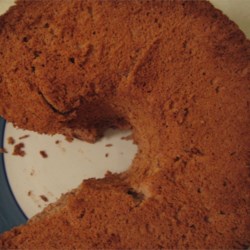