I hesitate to review this, bc I really modified it. But I see it has a bad rating but no reviews, so I'm going to go ahead and review it so that others might be willing to try it. Please forgive me. I halved the recipe, since it's just me tonight--probably should've quartered it, but oh, well. I'm really not too sure about the dough--it's sweet from the sugar, and I had to add about 1 1/2 c of flour to get it a little less runny. It still ended up like pancake dough, but I figure I could deal with that, and it baked up well enough. I don't like blue cheese dressing, nor did I have any, so I eliminated that. I also used sour cream instead of mayo and mixed it up with the refried beans, as I always have difficulty spreading refried beans. I didn't have chili, but I did have red kidney beans, so I used that in place of the chili. Also, for flavor I added some taco seasoning. Again, I know I changed it a lot, but I was happy with my modifications. The only thing I'm not that thrilled with was the pizza dough--again, the thickness could be due to my halving the recipe--some dough recipes are not that forgiving, but I didn't really like the sweet taste of it, and it ended up somewhat crispy. I'd be willing to try the recipe again, but with a different dough. And maybe if the bf's home and I have the other ingredients I'll stay truer to the recipe! Thanks for the recipe. 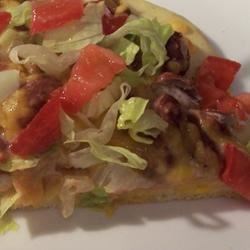