I made a couple modifications based on the previous reviews. First, I sauteed the onion and garlic until tender. Then I cooked the ground turkey. I would suggest not cooking the meat with the onion/garlic. Instead, cook the onions/garlic first, then remove them from the pan, add a little oil, and cook the turkey until done, and then add the onion back in. That way, the turkey can get golden brown and you'll get those little bits at the bottom of the pan, and deglaze it when you add the liquid. I mashed up only half a can of the kidney beans and left the remaining ones whole. Only added one cup of water with the crushed tomatoes, however, I like my soups really thick so I might consider adding even less than that next time, or just using some chicken stock in place of the water. Didn't have any paprika or oregano at home so I omitted that, but I would probably leave the oregano in for extra flavor. Then at the end, I added 2 ears of frozen corn towards the end of cooking. I would really suggest adding corn; it gives the chili an extra punch of flavor. Not a bad chili considering how easy and fast it is. 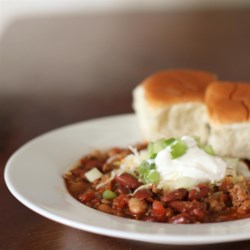