Outstanding. I was out of tomatoes so I substituted 1 large roasted red pepper. I also used 1 med red onion julienned and 2 small fresh purple eggplants roasted not fried. I recommend letting the skin burn a bit, I also allowed the eggplant to cool and drain before dicing it up. I finished cooking it and my 14 year old daughter came floating into the kitchen with a euphoric look on her face (she's my most discerning taster), and said, "Dad, what is that smell....hmmmmmmmmmm." I said, "here, try it." (she claims to "Hate" eggplant). I gave her a fat forkful of this with a big chunk of eggplant and her face melted into bliss producing, after a few resonating moments a satisfied smile. I said, "what do you think?" She said, "it's amazing." I said, "thank you, I'm glad to see that you have an appreciation for eggplant." her mouth dropped and her eyes opened wide and she said,"are you serious? this is eggplant?" I said, "that's right kiddo, thank you for being open and willing." This was a big hit and is in my list of staple meals that we eat regularly. 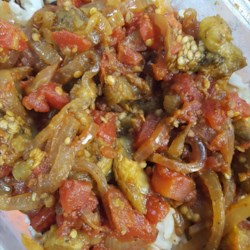