Okay...so nobody else has mentioned this..but is there a chance that it was supposed to be baking soda and NOT baking powder? Because i followed the recipe exactly and the cake is not so much a cake as a really dense doughy bread...and after having perused all the other hummingbird recipes they all say soda and not powder. Haven't tasted it yet but just on texture alone, i'm a more than a little disappointed to say the least. I did notice that others said it was a dense cake but i didin't think that it was going to be anything like what i got. I've had hummingbird cake before and it was fabulous...this not so much 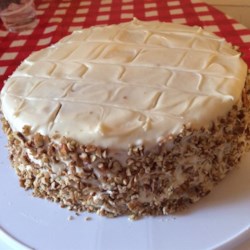