I followed the recipe exact except I took everyones advice and did one whole egg. I think it was too much egg. It was very wet, and hard to form into a patty. I was worried it would fall apart on the grill and fall into it. I formed patties the best I could and put them inbetween wax paper. I put them in the freezer for a couple hours so I had a better chance they wouldn't fall apart. This worked. I wouldn't say this was the best burgers ever. It was good, but different. I thought it was sweet, but had a good burger texture. I would much rather prefer a swiss and mushroom burger or a bacon cheddar burger over this. It was worth trying, but I wouldn't be adding it to my family dinner routine. It was good don't get me wrong, just not my style. 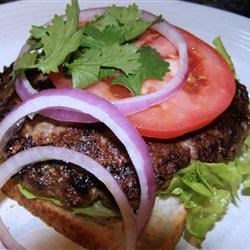