I thought that this cake and the frosting were excellent. Working full time, I'm not above taking an occassional shortcut, like using a jazzed up box mix. After comparing recipes for the frosting, I find that most are similar except that many only use 8 ounces of evaporated milk instead of the full can, which is 12 ounces, like this recipe calls for. I followed the recipe exactly until I got to the frosting. I then mixed only 8 ounces of evaporated milk in the pan with the other ingredients. With the rest of the evaporated milk, I added a couple of teaspoons of cornstarch and then mixed it in the bubbling frosting, insuring that it would be nice and thick. I then removed from heat, added vanilla, pecans and coconut. 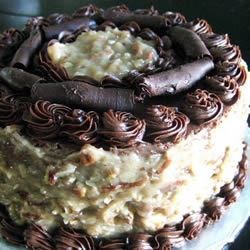