I. LOVE. THIS. CAKE. I've always made the chocolate version of Texas sheet cakes and like others had no CLUE there was a white version, but Diane, YOU my new little friend are just the BEST! I discovered this recipe just recently and have already tried several variations, with great success with every modification I might add. My first go-round, I needed a white cake for Church, something basic to go under a white cream cheese frosting to decorate with black musical notes. Little hesitant with the almond so used half almond, half vanilla on the extracts. Everyone loved it, so that weekend when family came over for the Super Bowl I tried the recipe as written. Realizing "as written" could mean walnuts OR pecans, I opted for pecans and all almond extract. Rave reviews was an UNDERSTATEMENT! Made it several times since then too. (You'd like to think I have no other dessert recipes, lol!) Making it again tonight to be used as a dessert after our youth's Spaghetti Dinner fundraiser tomorrow. Will be trying sprinkles instead of nuts this time since it'll be mostly kids in attendance. I was actually asked to bring a "box cake" but why use a BOX when you have a recipe like THIS! It's quick, SO easy, versatile and quite adaptable. The best part is it's mostly ingredients you already have on hand. Not one single "con" I can think of...it's just the perfect cake just the way it's written here! Diane, thanks SO MUCH for sharing...needless to say, for me, this one's a KEEPER! 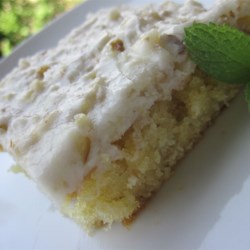