This recipe has serious potential. I followed the recipe exactly and found it to be salty even though I used low sodium broth instead of boullion. This could be due to baking it in a dish and not in the bird (sorry, I know waaaayyyy too much about microbiology to put my stuffing into the bird). I think the saltiness was due to the croutons I used. Next time, I will use packaged dry bread cubes instead. Also, I think the addition of italian sausage would be great, as well as some red bell pepper for more color. I loved the nutty taste and texture of the wild rice with the soft bread of the croutons. Thanks for the great idea! I'll be playing with the recipe over the next few years to create a fabulous Thanksgiving side dish. 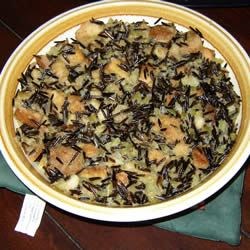