Thank you for the recipe. The cake was very easy to make. I liked that it was light and not very sweet. I served it reheated with some apple pie ice cream (limited edition from Edy's) and vanilla ice cream. Here are some tiny changes I made: 4 eggs instead of 3, because I had one leftover, light brown sugar instead of white sugar, I added some spices like cinnamon, nutmeg and 1 tsp. vanilla. I mixed the lemon zest with the plums instead and coated them with a little bit brown sugar, which made them sweeter and look glossy at the end. I didn't know what a tube pan was, so I used my pie form. It looked pretty (rustic) and I will definetly make it again in the next days, but with asian pears. I will report on how it turned out. Hope that helped. :) Update: I did make a cake with asian pears but I used a new recipe for a walnut pie crust (interesting recipe). Just wanted to let you know that the pears baked beautifully, in case you were curious. I was very surprised how firm they stayed. I expected them to turn out soft and soggy because of their high water content. The flavor was mild. 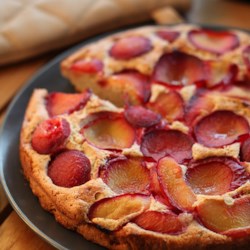