This was my first time ever to make a pumpkin pie. This was so simple to make, but I didn't use a graham cracker crust, I used a regular pie dough. I also mis-read the instructions for the cinnamon, usually when an ingredient will have 2 seperate uses w/in the same recipe it will list the amount like "1 1/2 tsp cinnamon, divided". Unfortunately this recipe did not have it listed as such, so I put the whole amount of cinnamon in the filling, not to worry, the cinnamon was not over powering. I really enjoyed the topping as well. When I served it, I placed some fresh whipped cream on the pie...yummy! 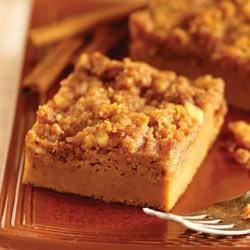