I thought this recipe was great! Very light, healthy, and easy to make. I changed it up a bit though. I used fresh green beans and cut them up. I thought they added a nice healthy crunch. I also used a Gala apple instead because that was all I had. I thought it added a nice sweetness. I also read the other reviews and decided to add some white onion also, which I thought helped kick it up a bit. I would definately make this again. I also added salt and pepper. 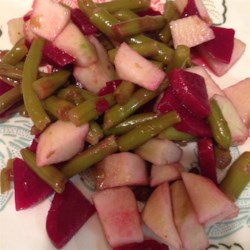