this is an awesome cake. I made a few small changes. I had 2 bananas and wanted it moist so I added 1/2 C applesauce and 2 tsp cinnamon. I made a cream cheese frost: 1 pckg Cream cheese, 1 C butter, 2C confectioner's sugar and 1-2 Tsp vanilla extract. I put this in the fridge while the cake was baking. I let the cake cool, then I cut it in half and put 1/3 of the frost on one half of the cake, then I had frozen blueberries, rasberries and strawberries that I put over the frost. then I put the other 1/3 of frost over the fruit. I put the other half over this and covered it with the rest of the frost and grated toblerone dark chocolate over it. tastes like a million dollars after chilling 1 hour in the fridge. thanks its yummmmmy 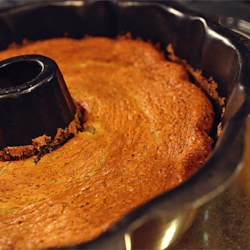