Ribs came out nicely. I did not have any ginger so it was not used, added a bit of honey and molasses to the coke and ketchup. I did season the ribs before browning with garlic and onion powder and I used a bit of Mrs Dash® garlic and herb seasoning and black pepper. I baked the ribs for 1½ hours covered, and then poured of the grease and sauce, I added some Sweet Baby Ray's® BBQ sauce, and baked them the remaining ½ hour uncovered. They were fall off the bone and finger licking good. 8-3-2017 Today for my birthday I made these again. I did not have cola this time. I used Cherry Dr Pepper. I also added a thinly sliced onion to the ribs. I also had the ground ginger this time. After I browned them I put them in my dutch oven and poured the sauce and onions over them, Then I put them covered in a 300 degree oven, I baked them 3½ hours, then I added some Sweet Baby Ray's to the ribs and baked them uncovered for ½ hour more. MMMMMMMMMMMMM they were so good. 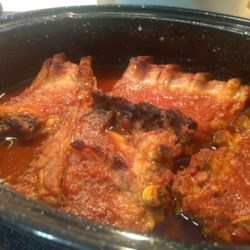