If there's two things I can't stand it's pompous foodies who say that a dish can only be made one way and with certain ingredients, and people who drastically change a recipe and then say it didn't turn out well. Unfortunately there's a ton of those kinds of reviews on this site and it's a shame that anyone would be turned off by great recipes reviewed in such ways. That said, this batter should be thin. Freakishly thin. So much that you worry it's not a batter at all. But trust in the ingredients and it will turn out correctly. Mine almost never come out round, so don't worry if yours don't either. Keep the heat fairly low, I use the click just to the left of Medium on my stove. But also keep in mind that because of the amount of liquid, these are really hard to burn. Which is good because they need the cooking time in order to stay together. If you feel the need to add some yeast for the sake of staunch traditionalism, go for it. I didn't notice anything to write home about. This is a good recipe for anyone who doesn't want to waste a whole package of yeast just for some pancakes. If you feel it needs to be made with buckwheat (though there's nothing in the overall definition of the blini/blintz family that says it has to be made that way), well there is a recipe on here for the buckwheat version. Lastly, I've also made this recipe with water instead of milk and it worked really well, just decrease the amount of liquid by about a half-cup for the full recipe. 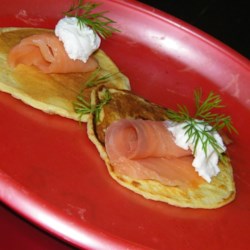