Don't be put off by the texture of this pudding! Kheer is the original rice pudding, which became part of western cuisine through the British. I like this, but my husband and son didn't (too 'spicy' for them). I didn't have enough coconut milk, so I used more 1% milk than called for. The flavour is nice and somewhat creamy (would have been better and creamier with the proper proportion of coconut milk). I used a little more rose water and cardamom than stated, used sultana raisins, and added a pinch of cinnamon. Other tips: cook the rice as long as it takes for it to become porridge-like in consistency. After refrigerating the leftovers, the kheer thickens up, so you might want to add a bit of milk. 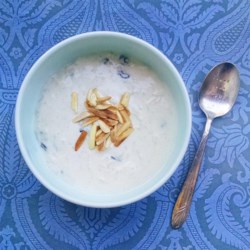