This is just my humble opinion, but I think it's very rude of people changing the recipe so much and then bragging about it like it worked out better than the one given. I don't understand why people make so many changes to the recipes on this site. It's out of control and almost seems like people want to one up the person putting the recipe on the site just to show they could do it better. I have not made this recipe yet but I will tomorrow, without all the brown sugar, without the change in oil, without the applesauce, etc. Post your own recipe instead of making these unneeded changes. 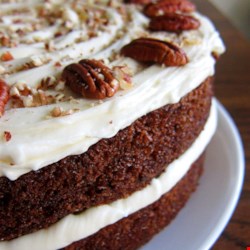