I had some trouble with this recipe. First, their was not enough crust to cover the pan so after making what the recipe originally calls for, I had to cut the crust recipe in half and make it again. That made enough. I also recommend melting the butter, it makes it much easier to mix. I too had trouble getting the chocolate to melt. As soon as I added it to the cheesecake batter it became lumpy. Does it need to cool a bit? The recipe doesn't say. I did serve this the day after making it and I thought it tasted just OK. Honestly, it was a little bit bitter and needed more sugar. I also couldn't taste any coffee flavor. I don't know that I would make this again. Something was off. 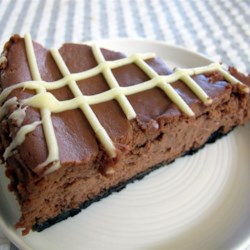