This is one of the best cakes I've ever had! I did make some changes, though. First, I used 1/2 cup high quality butter and 1/4 cup shortening instead of all shortening which I think gave it a richer flavor. Secondly, I used King Arthur AP flour instead of cake flour which I think gave it a better crumb. I made it in a bundt pan which gave it lots of crunchy surface. And I used the buttermilk sauce recipe given by another reviewer and spooned this while warm on the plate next to the cooled cake--spectacular! The cake has a lovely crunch to the outside and with the sauce it is so delicious. To the reviewer who thought this cake bland, I would recommend trying it this way because it is rich and has a terrific blend of wonderful flavors. P.S. I think it is crucial to use whole buttermilk which is hard to find. All of the grocery stores here carry only low fat (yuck) so I had to go to Whole Foods 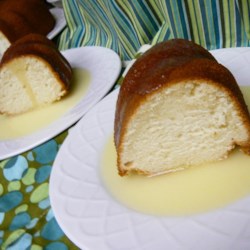