The best chocolate cake I've ever made. If you're looking for something basic and fluffy and chocolatey, this is the way to go. I've made it several times: Once the way it is written, which was really good, once with bittersweet chips which was also really good, and once with bittersweet chips and an added 1/4 cup unsweetened cocoa powder with the flour mixture--EVEN BETTER! It also tastes just great if you replace half the oil with applesauce for a slightly reduced fat version. Replace the eggs with a quarter cup applesauce and the milk with soy milk for a surprisingly delicious vegan version. Very versatile, and exactly that "boxed mix" texture but with out the boxed mix flavor. The batter may seem a bit runny but don't worry, that's what it's supposed to be like. Also, don't forget to have boiling water on hand. It won't work with cold water. UPDATE: I have officially made this into Mocha cupcakes: sub boiling H2O with boiling very strong coffee (or espresso). Use semi sweet chocolate instead of unsweetened chocolate. Deelish. Makes aprox. 2 doz. or a few more. YET ANOTHER UPDATE: for some reason the wording on the recipe has changed. It used to say "1 cup boiling water" and now it just says "water." This makes a huge difference. I can't remember why. I'm sure Alton Brown could explain it. I just remember reading somewhere that this is crucial in some food sciencey way. 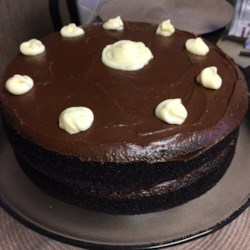