Excellent recipe. It was probably due to the relative humidity where I am (winter in the prairies up north) and also due to the technique I was using for kneading the dough (stand mixer), but I found that this recipe didn't even come close to having enough moisture, I probably added about an additional quarter cup of water until I got the consistency I was looking for. I bake a lot of bread, so my wheat was all pretty "fresh", and hasn't been sitting on the shelf for years, so that can be ruled out. I could have probably made due with much less moisture if I was kneading by hand (I tried that only once.....). It wasn't until I added that extra moisture that I got a ball of dough instead of crumbs swirling around in the bowl, like some of the other reviewers described. I kneaded it for at least 5 minutes (probably more), I mean why not, it's not like I'm doing it by hand right, leaving a nice spring in the mouth feel of this. I really appreciate that this recipe uses ingredients I always have in my pantry. If you are wondering wether or not this is a pasta recipe you want to try, go for it, it's definitely one that I've added to my repertoire. 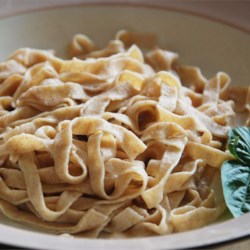