Skip to main content New<> this month
The Best Vegetarian Chili in the World
Reviews:

I was a little confused - ground oregano or leaf? (I ended up using the latter, because I had more of it.) Couldn't much drain the chile peppers, and I wondered whether to drain the beans (don't). Turned out very well, beautiful, though I might use a little less chili powder next time (and I used a skimpy 1/4 cup). Also used only 1 jalepeno - it was plenty spicy tonight, and will be spicier tomorrow. I used about a teaspoon of salt instead of a tablespoon and it was enough. Modifying review to add my experience cooking it in a slow cooker... I prepared the veggies (onion, garlic, green pepper, celery) as instructed, and then transferred them to the slow cooker before throwing in the rest of the ingredients except for the corn. I cooked on high for a couple hours and added the corn about an hour before the end and turned my cooker down to low at the same time (about 3 hours in the slow cooker in all). It turned out brilliantly. I was worried the veggie crumbles might get rubbery, but they did not, and the spices were mellower but still very tasty. Huge hit at the office, even though they are all meateaters. 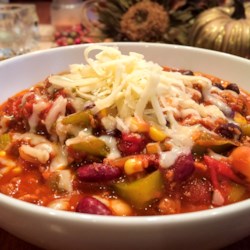 The Best Vegetarian Chili in the World