This was some SERIOUSLY tasty ham & beans!! I made it twice and the first time was a bit bland so the second time I took some other reviewers suggestions and used chicken broth instead of water (I used 2 cans) and put in 2 bay leaves. It was HEAVENLY. I couldn't get enough. I used a small turkey ham to cut back on cals/fat and it was delish. YUMMO! 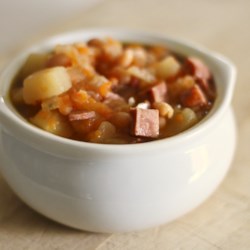