I'm giving this 4 stars as it's written. I followed the recipe exactly the first time - although it wasn't bad, I definitely felt like it was missing something. Just wasn't like the real thing. Well after tweaking it just a little, I've found that what it's missing is some salt and a little baking soda (that's what really makes it taste like "normal" cookie dough). I also used milk instead of water, but used less of it the second time around, just until it had the right consistency. With these changes it was definitely a 5-star recipe - I couldn't tell the difference between that and regular cookie dough! It's kind of dangerous actually ;-) 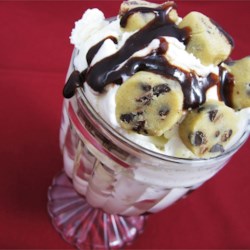