Anything French in nature can be daunting...(even French toast for me sometimes)! However, these aren't really that hard to make! Here are some things I learned from this recipe which may seem like a no-brainer to many, but I wasn't really sure having not ever fried in oil before. *Use a quart saucepan - not a frying pan. I know, seems silly, but maybe this will help someone. *I didn't use an entire packet of yeast, but am wondering if it really would have mattered much. It calls for 2 1/4 tsp and there's a bit more than that in the packet. *Don't just wait for the beignets to float to the top, they really need to plump. Make sure you flip them over so one side won't over cook. *Don't cut the pieces too small - they'll cook too quickly and not plump. *I didn't refrigerate the first "test" round and they turned out 90% correct. The second batch - fine - after refrigeration. *Am certain that butter would be fine instead of shortening. It's really just needing the fat component in the recipe at that point. *I used wax paper and a dusting of flour to pat out my dough. I used a pizza cutter to make the squares. *Be sure to use a paper bag with powdered sugar to toss/shake the cooked beignets. Super easy and less mess. Don't use a ziploc - they will stick to the sides. I hope this helps other beignet novices out there! I will make these again each year for Mardi Gras! 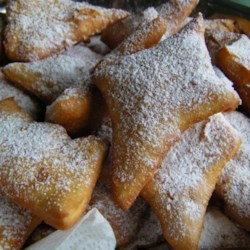