I think my brother-in-law would refuse to celebrate Christmas if I didn't bring this for Christmas morning! He always asks me "are you going to bring that cinnamon thing?" I have found that I have more success making this in a tall sided 9x13 pan than in a tube pan. For some reason when in a bundt pan I can't get the center completely cooked. One secret I have discovered to getting the center done without overcooking the edges is to cover the pan with foil after 15 minutes of cooking. It comes out perfectly that way. I let my rolls thaw enough to cut each of them into 3 or 4 pieces before assembly so I get a better distribution of cinnamon mixture throughout the dough. I also discovered that it works better to use non-instant pudding and combine it with the sugar and melted butter in a saucepan then sprinkle each layer of rolls with cinnamon and pour the sugar/pudding/butter mixture over the top. I think this is really at its best when served warm or on the same day it is baked. 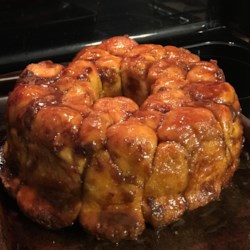