11/07/06: UPDATE: THESE ARE WONDERFUL MADE IN THE CROCKPOT!!!! Update: Have made this recipe at least four times since I have first posted. The onion relish is superb! ** I wish more stars were visible!!! THIS IS DELICIOUS!!!!! and I'm only talking about the marinade! Next time I will make everything for the true taste experience, but when my kids are sneaking into the kitchen to steal slices of the meat before dinner, I know I have a winner! I used flat cut brisket because it was on sale, but next time I'll use flank steak as directed or flap meat or carne asada meat as others have suggested because it was pretty chewy. But no matter, because it was just heavenly! Next time I will also slice the meat into thinner slices because I had to re-cut every slice after it was cooked. I also boiled the remaining marinade in the grill pan I used and poured it over the meat in a bowl before I placed the meat on the tortillas. I served it with homemade refried beans, and this is a new family favorite. Thank you, thank you for such a delish recipe! 4/6/06: Had to add---make this on a night that you plan to clean your stovetop because it splatters! 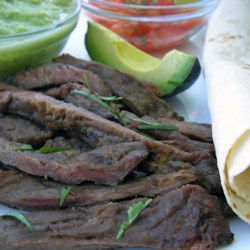