Okay, so.....here's the thing. I made the bread dough according to the recipe, only cutting it in half. I actually used the dough for cinnamon swirl bread. I used my Kitchen Aid mixer for the prep, proofing the yeast with the sugar and warm milk/water in the mixer bowl for ten minutes. When the yeast "bloomed", I added the butter and salt and part of the flour, then the eggs, and the remainder of the flour. I only needed a little over six cups of flour all together. Once the bread dough formed into a ball, I kneaded it with my bread hook for about five minutes, adding just a little extra flour to keep the dough from sticking to the bottom. I did the first raise in a greased bowl on my warm oven for a couple hours, divided the massive dough ball, then rolled out both pieces into a long strip with my pin and spread melted butter and a cinnamon sugar mixture over the rolled out dough and rolled it up and sealed them to prevent the loaves from seperating. (Each portion I used only a couple tbsp. of melted butter and 1/4 c. granulated sugar mixed with cinnamon.) I greased my loaf pans with just a little butter and set the loaves in the pans to double again. 350* for a half hour, these loaves were cinnamon-swirl perfection. This was quite a large bread recipe, even cut in half. It really gave my 30+ year old Kitchen Aid mixer a time of it. But the outcome.....excellent. Bakery-quality bread! 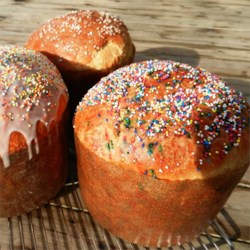