Holy Cow, this recipe was the best ever. Everyone at the party thoroughly enjoyed it. Cook time needs to be longer than 15 minutes. I used a relatively deep dish and it took nearly 40 minutes before the middle was done. To the reviewer whose pie crust kept slipping...did you bake it first like the recipe called for? I didn't have that problem at all. I added some mushrooms in with the red peppers and smashed down the pie crust after it had baked (it fluffed up a bit). Huge hit!!! 6 people are asking for the recipe. Glad to pass it on. Thanks so much. I will use this recipe countless times. 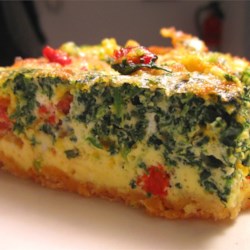