I made this recipe with cinnamon raisin bagels which I sliced into thirds. I added a half teaspoon of cinnamon and a half teaspoon of vanilla as well as a few sprinkles of allspice. Instead of dipping the bread into the sugar, I sprinkled it on. It proved less messy and I did not waste as much sugar. It was a good recipe but I'll probably try another recipe next time. 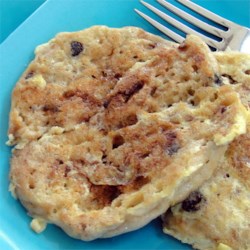